Habits have a very important role in everyone’s day to day since, in some way, they are necessary simplifiers when carrying out daily obligations. Unconsciously, one does not realize that, given the adaptation of a series of routine events, it generates a shorter path to the food satiety of the moment. In this way, the brain automates short actions and repeats – subsequently – what was done previously.

The mind remembers certain behaviors and completes the actions automatically, leaving the conscious part for more immediate and complex things. The brain processes about 400,000,000,000 bits of information per second, but only about two thousand are aware because of the unconscious stores the rest.

Eating habits are everything; An additional dessert, too many flours during working hours, chocolates on the desk: these are some of the reasons that generate routines. Habits All of them, little by little, ruin one’s health without becoming aware and it becomes increasingly difficult to break them.

HOW DO HABITS WORK?

As humans, we do many things automatically without having to think about it: shopping, cleaning, waking up, going to bed, eating, spending time with friends, reading, etc. Your daily life is undoubtedly interspersed with many recurring behaviors. This is extremely beneficial since you don’t need to plan or think about these activities. So you save energy for more demanding tasks that cannot be automated.

Generally, when speaking about creating a habit, it is said that you should exercise it for a certain time; that is, you need to do the same thing every day until it becomes a custom. However, it is also known that if you stop doing it more than once, you will not be able to establish it.

When you want to create a new habit, and even more so if you want to change a bad habit, such as exercising or eating properly, a little discipline and commitment is required, but not nearly as much as making a permanent change. All deprivation that is perceived is only temporary, so it is necessary to set short-term goals.

At least that was what was previously thought, since it was considered that only 21 days were needed to create a habit, such as drinking more glasses of water. However, this maxim is based on a book published in 1960 by plastic surgeon Maxwell Maltz.

In his book, the specialist tells that it took certain amputee patients an average of 21 days to adapt to the loss of a limb, so he argues that people take that number of days to adapt to important life changes.

However, because eating or exercise habits are mainly related to the social, economic and cultural characteristics of a population and even the family, reprogramming a lifetime with or without certain habits could take a little longer.

According to researchers at the University College of London, creating a habit, such as exercising or eating healthier, can take around 66 days, a period that allows you to fix and maintain it for many years.

From that moment, the habit acquires a certain automatism, and it is not necessary to do it, not even to think about it intentionally, to be able to repeat this behavior, explains Jane Wardle, co-author of the study that was published in the European Journal of Social Psychology.

What this study reveals is that when we want to develop a relatively simple habit, such as eating a piece of fruit every day or taking a 10-minute walk, it can take us more than two months of daily repetitions before the behavior becomes a habit.

On the contrary, the omission of a single day is not harmful in the long term, it is those early repetitions that give us the greatest increase in automaticity to establish it.

Honestly, what else is 21 or 66! The interesting thing is that we are able to learn, train and modify what we choose and want. The number of days is relative. It depends on factors such as insistence, perseverance, skills, the psychological variables of personality and interest. The change is around two months and a peak. What are two months in the cycle of our life? Nothing. It takes that time to be able to make the change we want. And this makes us free and powerful.

WHY IS IT SO HARD TO CHANGE THEM?

Normally, habits are created from childhood and are almost always reinforced by our environment to which we belong. It is for these two reasons that changing an eating habit can cost a little more. It is also difficult because the brain sets in motion defense mechanisms to prevent change automatically and unconsciously.

In addition, our lives are a set of habits that we practice every day in almost the same way, on each occasion and fighting a lifetime of entrenched habits at mealtime can cost a little more than normal.

When you want to change your life and your habits, you have to “place” the desired behavior on the path of least resistance. This eliminates the need to put in a lot of effort to do it. If the activation threshold is high (i.e. it requires a lot of willpower), this will very often distract us from our resolution.

It is essential to identify the reasons for harmful (or inappropriate) behavior before trying to replace it with something else. Do you act out of boredom, out of stress? Old habits always satisfy a need and always have positive consequences for you. These may be very fleeting, counterproductive, and bad in the long run, but you will definitely find some satisfaction in them. Finding the causes of old harmful habits allows you to find the ones that can best replace them.

Since nature abhors a vacuum, you should never consider giving up an old habit without replacing it with something else. A new alternative response to an environmental stimulus is better than no response at all. Indeed, the triggers present in the environment will automatically continue to activate the old habits in your brain. It is, therefore, necessary to replace the old habits with something positive, which will give advantages without disadvantages. Obviously, the effort required at the start will be a disadvantage, but it will gradually decrease.

The main challenge for changing lives is therefore not the unwillingness to change, but the always automatic and persistent activation of old habits due to persistent triggers. To successfully implement change, you, therefore, need to:

WHAT ARE THE INGREDIENTS TO MAINTAIN A HABIT?

The first thing we must do is generate an action plan, and this involves creating short, medium and long term goals to make us not give up on the first change and continue persevering when we see that we are fulfilling what we propose. The plan must also include the definition of the time of day when I will do what I want. Well-defined and organized plans allow much easier monitoring.

Creating a habit depends on two main factors: time and repetition. In order not to lose motivation, it is necessary to adjust the new habits to be implemented and not to embark on something that requires an exceptional effort on a daily basis. It is better to move upmarket gradually.

We all have deep-rooted habits in terms of eating. Some are fine (“I always have my breakfast”) and others not so fine (“I always leave the plate clean”). Although we have acquired many eating habits since childhood, it does not mean that it is too late to change them. 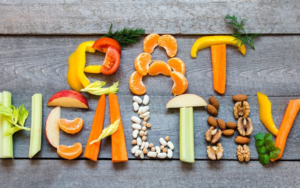 Sudden and radical changes in eating habits, such as not eating more than cabbage soup, can lead to short-term weight loss. But these exaggerated changes are neither healthy nor good and will not help in the long term. To permanently improve eating habits, an approach is needed in which to Reflect, Replace and Reinforce.

REFLECT concerning all your eating habits, both good and bad, as well as the things that set off your eating in an unhealthy way.

REPLACE your unhealthy eating habits with healthier ones.

Depending on which phase you are in, you may come to understand the reasons for certain failures in your attempt to bring about healthy changes in behavior.

To help you understand the five steps, here’s a concrete example: you’re about 30 pounds overweight and at risk for cardiovascular disease, especially because of your family history.

You do not really recognize that there is a problem and you do not intend to change. The disadvantages of losing weight far outweigh the benefits. So even if you sign up for a fitness center, either under the fear of getting sick or under medical pressure, it is quite possible that you will give up very quickly, for lack of depth in your resolve.

You are aware that the problem exists (yes, I am 30 pounds overweight and it is detrimental to my heart health). There is an intention to change, but the commitment to act has not yet been made. You assess the positive and negative aspects of your problematic situation and you weigh the pros and cons of the efforts to be made. While still at the stage of ambivalence, the benefits of losing weight are becoming increasingly important in your assessment.

You are in a decision-making period and you intend to change because the advantages far outweigh the disadvantages. At this stage of “preparation”, you plan the precise moment, for example: “In a month, I will start my changes in eating habits in order to lose these 30 extra pounds.”

You have undertaken the changes to achieve your goal and you are beginning to see external recognition for the results of your efforts. Positive reinforcement is very important during this “action” phase.

Your changes have been maintained for six months, you have already lost 15 pounds and you have the ability to avoid problematic eating behaviors; your self-esteem is greatly improved and you work hard to prevent relapse.

Unfortunately, even if you have reached the “hold” stage, the game is not won, as you may relapse by laxity or weariness. A smoker would relapse four to six times on average before successfully quitting. And after each failure, we go back through the same phases from one to five, as if it were the first time.

In short, knowing where we are can help us to understand the failure of our good resolutions and to delay a change in behavior if we are not ready, in order to have a better chance of success in the future.

And you, do you want to make changes to certain lifestyle habits? What stage are you at?

Do not let us beat self -casting, that is, do not leave for tomorrow what you can start today. The sooner you start, the sooner you will achieve what you want to achieve. Creating a habit requires constant discipline and work, what we can face if we really want and feel passionate about what we can achieve. Go ahead with your new habits!